The Perfect Pregame – good friends, mixed company, rockin tunes, and of course a few drinking games. That sounds like a perfect pregame to me at least. Check out this list of five of the absolute best drinking games to ensure that your pregame turns into a great night. Plus an honorable mention!

When it comes to simplicity, speed, fun, and sheer quantity of alcohol consumed, it’s tough to beat 7/11/Doubles.

At any given time, one person acts as the designated dice roller and one designated beer chugger. The object is simple: the person drinking the beer must consume a cup filled with beer before the dice thrower can roll seven, eleven, or doubles. In an added twist, the dice roller gets to pour the beer.

At any time before the round begins, any player who is not the designated drinker can steal the cup. That immediately initiates a round versus the current roller. This is a useful tactic for bailing out your friends if they can’t keep up, or if you’re just feeling a little thirsty.

This classic doesn’t get the respect it deserves. Probably because it takes the slightest bit of effort to set up a dynamite playlist, and most of us are too lazy to put in that upfront effort. After the playlist is made though, what could beat a Power Hour? You sit around and listen just enough of all your favorite songs to satisfy your ADD, drink beer and BS with your friends. Sign me up!  Check out our reggaeton power hour here for some cross-cultural fun!

In the purest form of this game, players are supposed to take a shot of beer at the break every minute between songs, which works out to around five and two-thirds beers. Most people just wind up sipping their beer instead, for a total of three or four beers over the course of the hour.

Beer Pong might just be the king of them all when it comes to drinking games. Competitive enough that things can get serious, but with plenty of room left over for drama, swings in momentum, and epic comebacks.

There’s a good chance your perfect pregame will feature a round of Kings. Plenty of party-goers know this game, and for good reason. Kings remains by far one of the easiest to learn and most fun drinking card games.

Fan out a deck of cards around an unopened can of beer. Players take turns drawing a card and performing the according action.

After the event associated with the card, the player puts the card underneath the unopened beer tab, making sure not to open the can. If a player accidentally opens the can (even a little bit – listen for the hiss), that player drinks the beer, then puts a new unopened beer in the ring of cards.
Keep playing until you run out of cards.

Ace: Waterfall – Every player begins drinking in turn, no one can stop until the player before them stops
2: You – Whoever drew the card assigns a drink
3: Me – Whoever drew the card drinks
4: Floor – Everyone races to touch the floor, last person to do so drinks
5: Guys – All guys drink
6: Chicks – All girls drink
7: Heaven – All players point to the air, last player to do so drinks
8: Mate – Pick a person to drink with
9: Rhyme – Say a phrase, and everyone else must say phrases that rhyme in turn
10: Categories – Pick a category, and players must say something from that category in turn (e.g. colors, states, dog breeds)

Jack: Never have I ever – Each player puts up 3 fingers, then starting with the person who drew the card, each player in turn says “never have I ever [done whatever]”. If you’ve done it, you put a finger down. Play until someone loses

King: Ruler – Make a rule that everyone must follow until the next King is drawn. Be careful with this one – bad rules have been known to kill a game of Kings!

5 – You Got Served aka Boom aka Slap Cup

To set up the game, grab a bunch of cups, fill them about 1/3 with beer, and arrange them in a circle around the table. You can also make a death cup with a full beer or some liquor for the final loser to consume.

Next, grab two empty cups and two pong balls and give them to two players across from each other in a circle. These two players will start the game.

If the player to your right bounces their ball into their cup first while you are also shooting, they can slap your cup away forcing you to grab a new cup from the middle of the table, drain it and keep trying.

Meanwhile, the player to your right passes their cup to the player on your left and the game continues. No one has to wait for you to drink, so drink quickly, focus, and don’t get lapped again!

Eventually the cups in the middle of the table run down to the “Death Cup” that has either a full beer or liquor in it – the last player to have their cup slapped away has to drink this.

Although an incredibly fun drinking game, this did not make the list because it will probably lead to an entire night of drinking and playing video games rather than going out for an epic night on the town. Simply fire up Halo (realistically you could do this with an first-person shooter, I just have my own preferences) with a few friends, play your favorite scenario, and triumphantly shout “DRINK BITCH” at your victim any time you make a kill.

Your victim takes a drink hopefully before they get spawn-killed and the cycle repeats ad infinitum. Endless amounts of fun, playing on 2 v 2 or larger teams instead of a free-for-all leads to even more intense competition. Depending on your definition of a perfect pregame, this might be just what the doctor ordered. 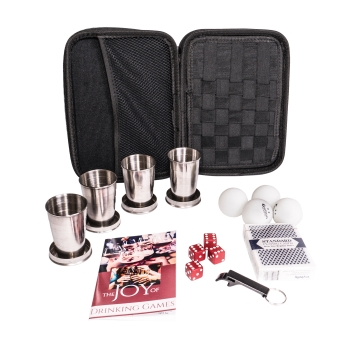 Get more ideas for your Perfect Pregame..

Don’t just take my word for it! Check out some ideas for more awesome drinking games in these Reddit threads