If you’ve ever been to a party or pregame you’ve probably played beer pong or king’s cup there.  For good reason – those games are a ton of fun.  But play them enough times and it can start feeling stale.  Why limit yourself when there are an infinite number of ways to get drunk?  Below you’ll find seven unique drinking games, tried and tested to take your pregaming to the next level.

Let’s be straightforward about this: this game will get you drunk.  Like, really drunk.  That said, if this is your goal few games can rival 7/11/Doubles when it comes to sheer simplicity and fun.

Here’s how it works: at any given time, one person acts as the designated dice roller and one the designated beer chugger. The object is simple: the person drinking the beer must consume a cup filled with beer before the dice thrower can roll seven, eleven, or doubles. In an added twist, the dice roller gets to pour the beer.

At any time before the round begins, any player who is not the designated drinker can steal the cup. That immediately initiates a round versus the current roller. This is a useful tactic for bailing out your friends if they can’t keep up, or if you’re just feeling a little thirsty.

Another dead simple game, this one works pretty much exactly the way it sounds. Everybody puts their phones into the middle, and everybody grabs a random phone. Compose a text to anybody in their contact list and they have to either send the text or take a shot.

To avoid real life consequences, you can exclude people like parents, grandparents, coworkers or probation officers.  But then again that would take half the fun out of it, wouldn’t it?

You’ll need a few supplies for this one, namely some paper and pens/pencils and a judge.  Everyone takes turns calling out a random object or scene to draw (the weirder the better) and all the contestants take thirty seconds to draw the challenge. All players and judges vote on best and worst drawings. Winner gets to give out a drink to any player, and loser drinks a double.

Ok, so this is basically beer bong, but with a bunch of twists.  Still counts.  Two teams of three, one for the US and one for Vietnam. Each team has ten cups. The US sets up their cups in a standard ten cup triangle formation and puts about a third of a beer in each cup. Vietnam’s can place their cups where ever they want on their side of the table and an entire beer goes into each one.

But let’s not forget the Tet Offensive.  If the US team manages to sink all of Vietnam’s cups, the Vietcong shoot continuously for an entire minute, all while someone is continuously flipping the lights on and off. If the Vietcong make all the cups they win, if not USA wins. 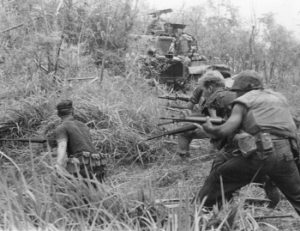 Another extremely simple drinking game that can get you very, very drunk.  Proceed with caution.

Place many shots on a table: gin, vodka, tequila, or any other clear liquor, and as many shots of water. Every player takes turns taking a shot, then saying “mmmm water.” If they aren’t convincing, they have to do another and the cycle repeats. If the accusers were wrong and it was water, they must drink. Remember it takes some time before you feel the effects of those shots and don’t get too ambitious with this one.

This also game requires some supplies, specifically tape and canned beer. After consuming a beer, a wizard will tape their freshly opened beer onto the top of the previous empty beer, eventually leading to a long wizard staff of empty beers over time, plus one beer to drink on top.

The wizard must continue drinking out of the topmost beer on their wizard staff to remain in the game. If at any point their topmost drinking beer comes off the staff, then they are out of the game, and their final score stands as the number of beers can left on their staff.

But all is not lost.  They can still participate by using their staff defensively to prevent other wizards from extending their own staffs. The winner is the the wizard with the highest score at the end of the game.

Realistically you could do this with an first-person shooter, Halo just happens to be my favorite.  Simply fire up the game play your favorite scenario, and triumphantly shout “DRINK BITCH” at your victim any time you make a kill.
Your victim takes a drink hopefully before they get spawn-killed and the cycle repeats ad infinitum. Endless amounts of fun. Playing on 2 v 2 or larger teams instead of a free-for-all leads to even more intense competition.

Take a look at Perfect Pregame’s Drinking Games Kit, which contains our “Joy of Drinking Games” booklet, all the accessories to play dozens of drinking games, and the case to take them on the go.

You can also check out these Reddit threads for some more ideas.  Got some unique drinking games of your own?  Let us know!